"Some of the demographic changes over the last 6 years" 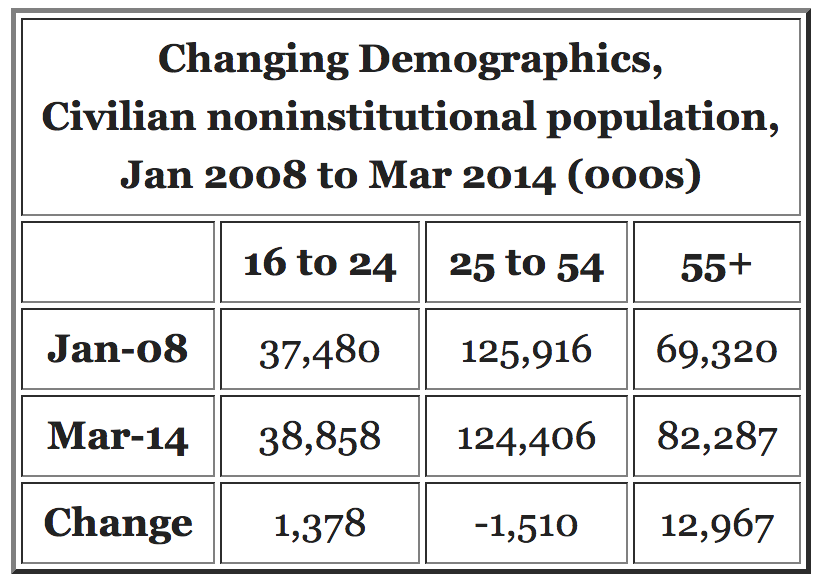 2) There are fewer people in the prime working age group.

3) There are many more people in the older age group."

http://www.calculatedriskblog.com/2014/04/wsj-employment-graph-ignores.html#CsuIyjjJ01cPS2E2.99
.
.
If there are more than 3 workers contributing to Social Security for every beneficiary, how will less than 2 workers be able to pay for more as the Baby Boom retires?

Was it justifiable for the baby boom to promise themselves tens of trillions of unfunded benefits, like Social Security, Medicare and Medicaid, for future generations to pay for?

From this…arise all conflicts that lead to economic crises
to panics, depressions, violent and revolutionary transfers of wealth
and perhaps most wars

If workers earn, pay taxes, spend, save and invest while retirees divest, downsize, budget and draw income and healthcare benefits, what’s going to happen when more retirees want what fewer workers may not be able to deliver?

Are Baby Boomers going to get more or less than they think, if the supply of what they want to sell exceeds demand, as they exchange assets for needed goods and services at relatively the same time?

If there are at least 15,000 professional American economists, and less than 1% predicted the 2008/9 financial crisis, most financial industry economic prognostications appear to be relatively useless.

If investment returns are dependent on rising home values and liquidity supplied by new and existing investors, what should happen if incoming investment slows and lack of liquidity creates a confidence crisis?

Eventually, either financing costs rise
or income comes in below expectations
leading to defaults on payment commitments

The federal government stabilized the economy by borrowing from relatively younger American's and their children who may not reap the prosperity of their parents.

Corruption of the political, capitalist and information systems negatively influenced economic performance and consumer behavior through legislation, budget appropriation, regulation and taxation to benefit a few at the expense of many.

If Bernard Madoff distributed money from wealthy newer investors to pay earlier investors until there wasn't enough money to continue, does the US government operate under the same structure with mandatory participation for all?

Socioeconomic disharmonies will likely increase.
Posted by g at 6:21 PM