The City of Greensboro's 457 Retirement Plan, Its Stable Value Fund, and How to give City Employees a Raise

A 457 plan is a non-qualified tax advantaged deferred-compensation retirement plan for the City of Greensboro's employees.

Greensboro's government provides the plan and employees defer compensation into it on a pre-tax basis.

But 49% of the plan is invested in the VantageTrust Plus Fund, otherwise known as a Stable Value Fund;

The VantageTrust Plus Fund's Objective;

The expense ratio for the VantageTrust Plus Fund is in addition to the $89,168.05 above.

As can be seen below, and semi-confirmed by city staff, the VantageTrust Plus Fund charges .81% on top of $89,168.05 charged above.

All the other funds in the plan also have underlying expenses, like the VantageTrust Plus Fund, some of which get kicked back to the retirement plan provider. 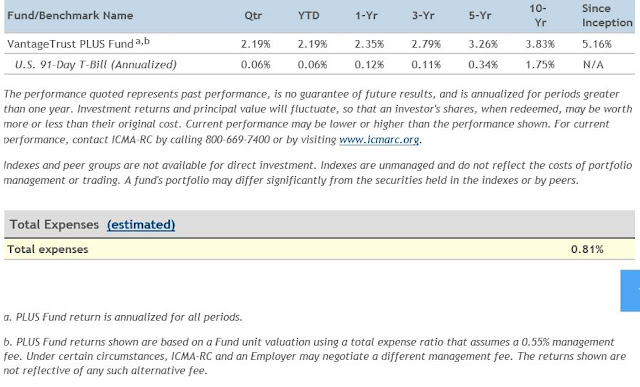 The returns about "assumes a 0.55% management fee, which "an Employer may negotiate"

The following is from the agreement between ICMA and the city;

This is what legal kickbacks sounds like that are not included on fund fee disclosure disclaimers; 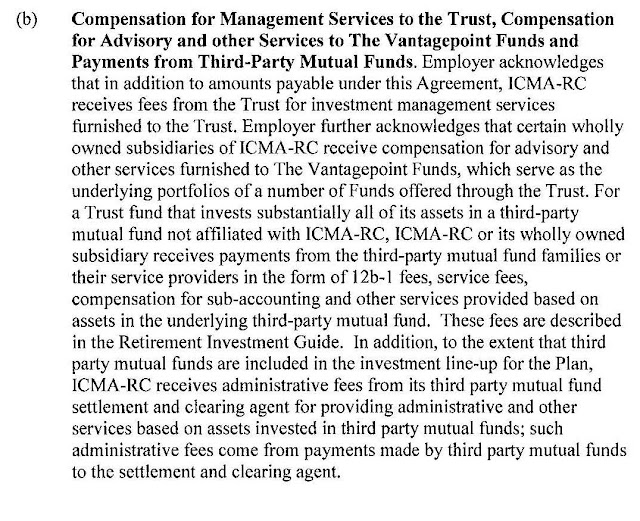 In a nutshell, the above wording means ICMA makes money on the back end through City of Greensboro employee funds that were very poorly disclosed to the city's employees by ICMA.

What big print can give, fine print can take away.

If the fees are negotiable, and city staff negotiates the VantageTrust Plus Stable Value Fund down to 0.25% instead of 0.81%;

Again, the likelihood for Greensboro city staff to have known about this issue is relatively small, because my industry has been misleading retirement plan sponsors for decades on how fees are accumulated by brokers and providers.

The City of Greensboro's 457 Retirement Plan, Its Stable Value Fund, and How to give City Employees a Raise

George Hartzman
Office in Greensboro at Lake Jeanette
336-763-4733
hartzmantax@gmail.com
Authorized PTIN and IRS e-file provider
Free Consultations and Estimates
Flexible Hours
Weekend Appointments
Virtual & Drop-off Services
Outdoor Meeting Area
Remote eSigniture DocuSign and Review
Refund Direct Deposit
linkedin.com/in/georgehartzman
A fiduciary relationship requires an advisor to act in a client's best interest.
Disclaimer Statement
The information on Hartzman Tax & Fiduciary's website is provided for general educational purposes only and may not reflect changes in federal or state laws. Before taking any action based on this information, we strongly encourage you to consult with a professional accounting advisor about your specific situation.
IRS Circular 230 Disclosure
Pursuant to requirements imposed by the Internal Revenue Service, any tax advice contained on this website is not intended or written to be used, and cannot be used, for purposes of avoiding penalties imposed under the United States Internal Revenue Code or promoting, marketing or recommending to another person any tax-related matter. Please contact us if you wish to have formal written advice on any matter presented on our website.
Opinions expressed are those of the author as of the date of the report, and are subject to change without notice. Information has been obtained from sources believed to be reliable, but accuracy is not guaranteed and should be independently confirmed.