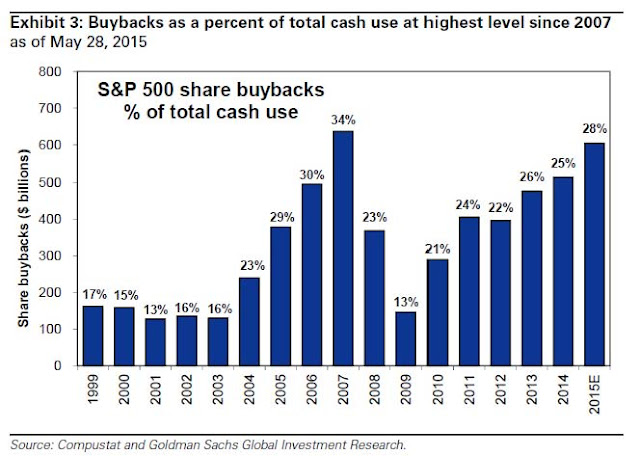 "by almost any measure, US equity valuations look expensive. The typical stock in the S&P 500 trades at 18.1x forward earnings, ranking at the 98th percentile of historical valuation since 1976. For the overall index, the aggregate forward P/E multiple equals 17.2x, a rise of 63% since September 2011, compared with the median expansion of 48% during 9 previous P/E expansion cycles. Financial metrics such as EV/EBITDA, EV/Sales, and P/B also suggest that US stocks have stretched valuations. With tightening on the horizon, the P/E expansion phase of the current bull market is behind us."

US equity valuations are also historically extended when adjusted for the extremely low interest rate environment. For example, during the past 40 years when the real interest rate (10-year Treasury less core CPI) was between 0% and 1%, the S&P 500 forward P/E multiple averaged 11.2x, well below the current level. Moreover, since 1921 (94 years) when real interest rates have been 0%-1%, the trailing P/E multiple has averaged 13.5x, which is 27% below the current trailing S&P 500 index multiple of 19x.

Valuation looks even more striking in the context of current profit margins—the highest in history. Since 2011, margins for S&P 500 (ex-Financials and Utilities) have hovered around the current 9% level. Information Technology has been the driving force for the overall margin expansion. Profits are highly sensitive to small changes in margins: every 50 basis point shift in S&P 500 margin translates into a roughly $5 per share swing in EPS. Given the current P/E multiple, a $5 shift in EPS would translate into a swing of nearly 90 points to the valuation of the S&P 500."

http://www.zerohedge.com/news/2015-06-01/almost-every-measure-stocks-are-overvalued-warns-goldman-after-slamming-corporate-bu
Posted by g at 10:35 PM