City of Greensboro executive management is in possession of the following information which should provide roughly $125 per year in investment and administrative fee savings for about 2,780 City employees in Greensboro's 457 qualified retirement plan (like a 401k).

ICMA-RC's proposal for Winston Salem dated November 30, 2011 states "based on a full plan take over of approximately $20 million in plan assets with 1,149 participants." and "ICMA-RC's minimum annual revenue requirement is 0.34% of assets with a five year contract term." 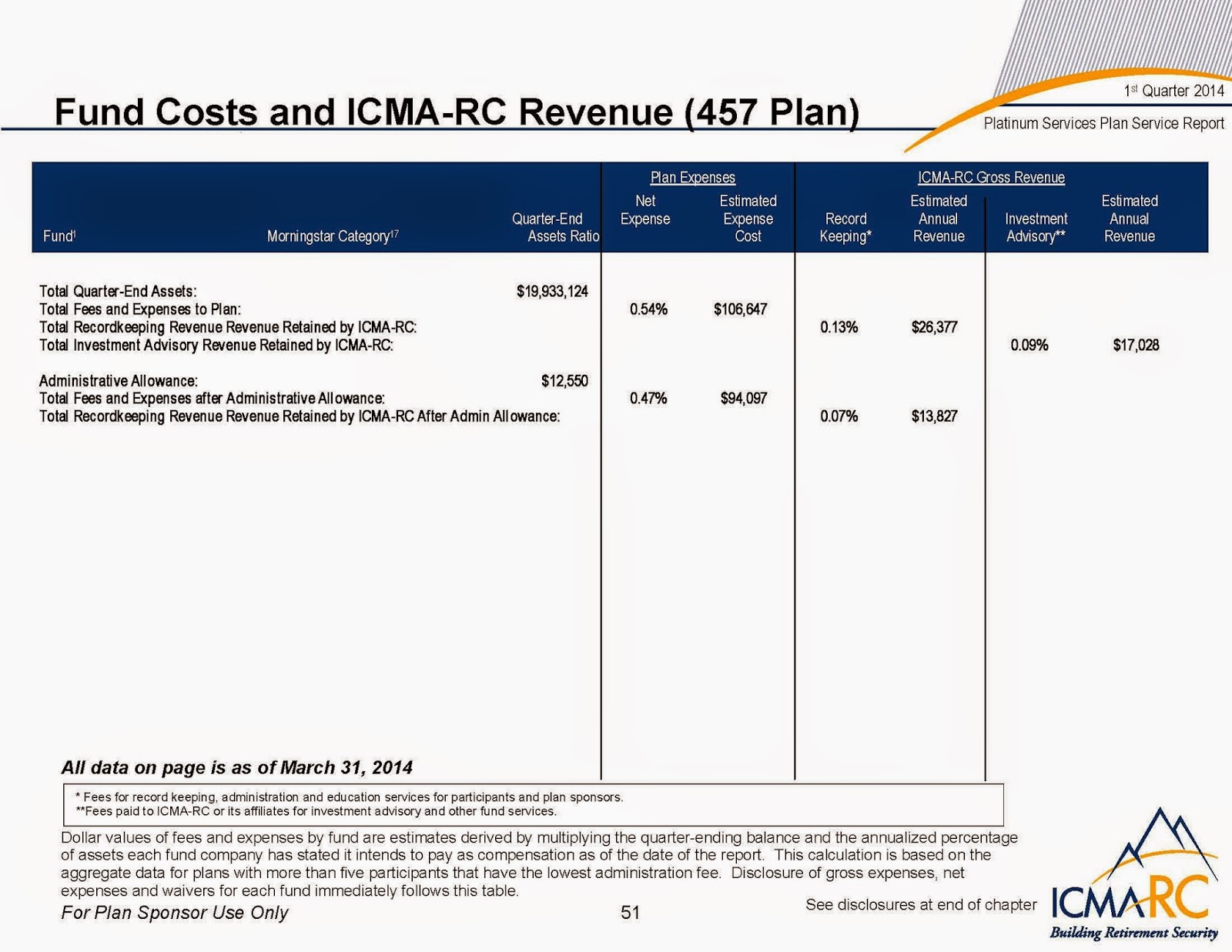 Greensboro is currently allowing ICMA-RC to take excess fees from Greensboro's employees, as Winston Salem negotiated the excess fees to be returned to their employees' accounts. 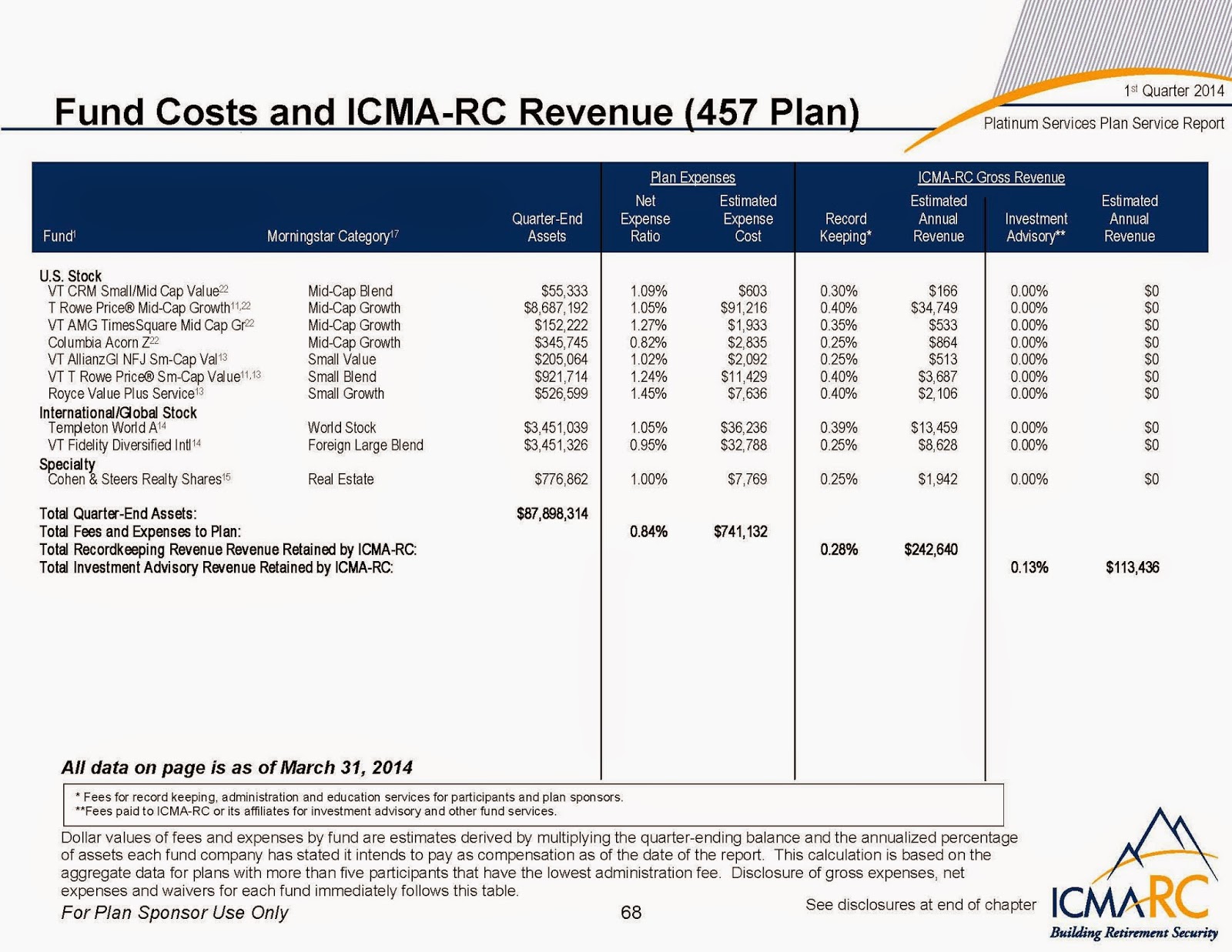 ICMA-RC's proposal for Winston Salem also states "If there is a shortfall in revenue, ICMA-RC and the City shall mutually agree upon a method to make up the shortfall necessary to meet the revenue requirement", meaning there is a floor to how much ICMA-RC needs in revenues per participant, which Greensboro's Mary Vigue via Jim Westmoreland denied in a breach of trust to City of Greensboro employees.
.
.
The retirement plan consultant's letter to Winston Salem dated December 18, 2014 states "with respect to assets held in the Stable Value fund, the expense ratio of this fund includes 0.34% fee attributable to ICMA-RC services." and "the investment management fee appearing for the Stable Value fund is 0.48%."

And "the original “fee agreement” for ICMA-RC administration/recordkeeping services is 0.34% of plan assets; [Retirement Plan] Consulting will be monitoring the total dollar amount of these fees to ensure they remain reasonable given the inherent escalation of dollar revenue attributable to asset based fee structures (assuming the plan is growing e.g. new contributions and earnings).

Thus, we may determine the 0.34% fee needs to be calibrated lower in the future due to the growth in plan assets.

By mirroring the Federal Government's Thrift Savings Plan, Greensboro could dramatically lower the cost and increase the returns via low cost index funds, whose expense ratios could be a bit lower if assets in each are larger than $5 million;

In 30 years, another $125 per year per employee compounded at 7% should leave another $12,634 each by mirroring the federal government's Thrift Savings Plan, designed with low cost index funds by federal employees for themselves, instead of a D.C. "non-profit" whose CEO makes more than $2 million per year.

Renegotiating Greensboro's 457 plan fees could save plan participants about $347,848 per year, but City Manager Jim Westmoreland and Assistant City Manager Mary Vigue, indirectly affiliated with the plan's administrators, worked to prevent lower costs with the help of financial industry lobbyists.

Westmoreland and Vigue have acted in the best interests of a retirement plan company connected to their management association instead of the employees they are supposed to represent.

Please help retain more money in our community instead of letting Greensboro's retirement plan provider skim more than necessary by contacting City Council to advocate for the reallocation and renegotiation of the plan's funds and fees.

It's the right thing to do.

"TriMet's 401(k)-type plan on the screen behind him and said that, outside the federal government's Thrift Savings Plan, this was "the best I've ever seen."

Concerning the contents of an information request concerning Greensboro's 457 plan

Emails between City of Greensboro, Charlotte and some Winston Salem employees and their 457 Retirement Plan Provider


Sorry, I thought I had forwarded this in response to your question. Anna Ellis

Anna
We have an additional fee of .15%. We reduced that from .20% last spring during our annual review. You may recall that we have proactively reduced this over the years as more participants and assets have come into the plan. We will continue to reduce that as the plan grows.

For comparison purposes, the attached doc you sent from nationwide/NACO additional fee is .70% (roughly 4.5 times higher).

Please let us know if we can be of further assistance.