"In early June an enhanced policy for Envision PORs was announced. The new policy states that for a plan to maintain POR status: •A client presentation must have been generated and presented to the client within the past 12 months and

•The POR Plan Result may not score lower than the Target Zone (<75 12="" consecutive="" for="" months.="" p="">
If a plan is not brought into compliance within 14 months, based on last presentation date or the last date the plan had a score in the Target Zone, the Firm will deselect the plan as a POR. Please note that the Envision plan will remain in the system, but the POR designation will be removed."
.
.
At the time Complainant received the POR report, which was after Hartzman went public with the information in June, 2012, Complainant believed but did not possess admissible evidence that if Complainant didn't recommit Envision related fraud on clients with accounts governed by the Advisors Act, Wells Fargo stated it could recoup the outstanding balance of a $42,862.68 4front retention bonus earned via fraudulently created Envision plans. 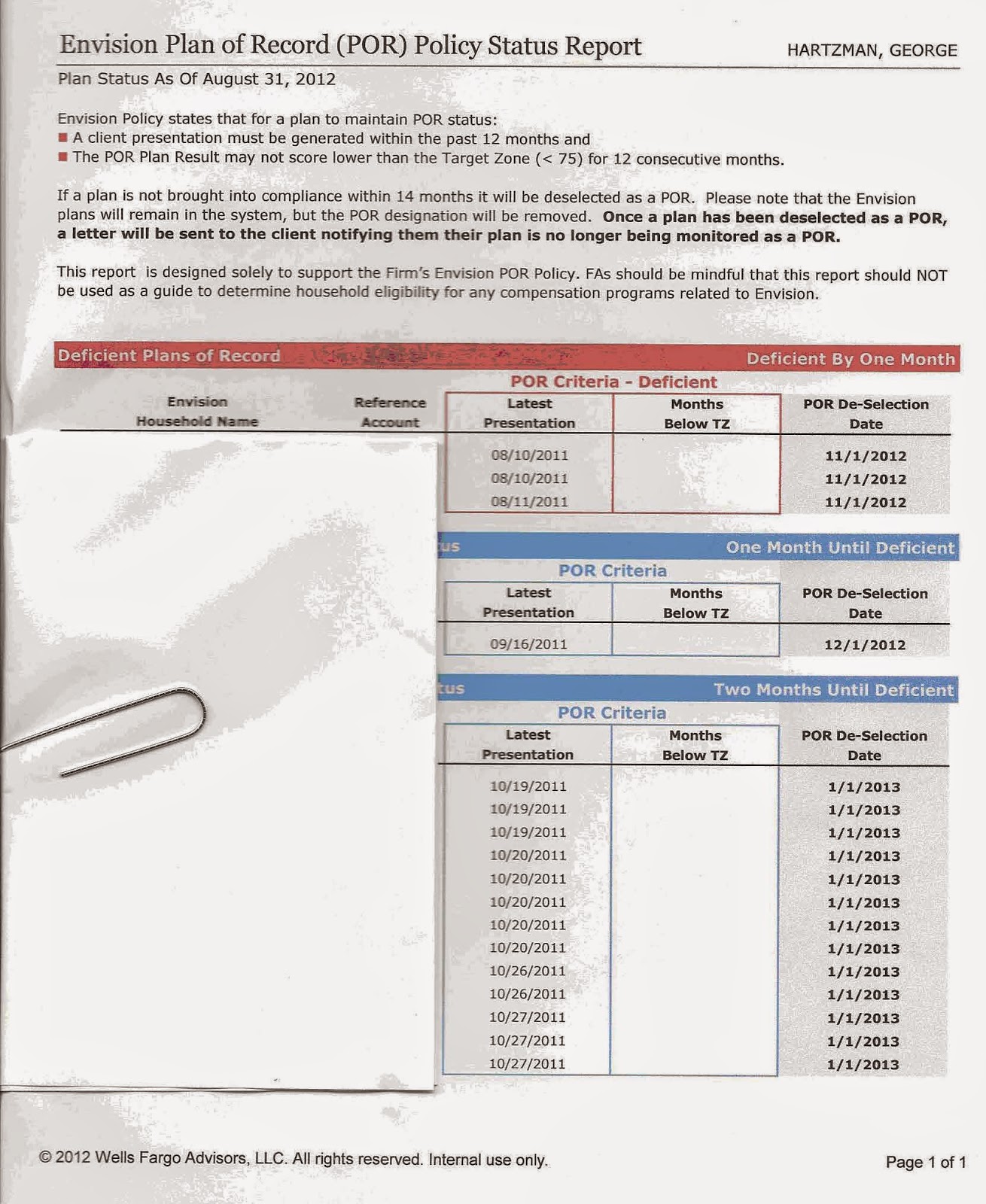 This report was a direct cause of the September 10, 2012 email showing how Envision plans were rigged to qualify for 4front bonuses, which led to my termination.  Until going public, I asked my assistant Mary Ann Godino to create and update the plans to qualify and stay in compliance for the 4front bonus I had already received.  I was being asked to recommit fraud on clients with accounts under the Advisors Act and I didn't have the money to pay Wells Fargo if they initiated the claw back.

If there was a claw back provision, as was my assumption at the time of which I have no evidence of other than hearsay, which Respondent refused to provide, an adverse action may have taken place.

William Spivey was known to personally meet with Advisors who didn't update their plans to make sure that they did and that "The POR Plan Result may not score lower than the Target Zone (<75 12="" aaron="" accounts="" act.="" advisors="" by="" clients="" coerced="" consecutive="" for="" fraud="" governed="" landry="" means="" months="" nbsp="" of="" p="" recommit="" spivey="" supervision="" the="" to="" under="" upon="" which="" with="">
Complainant contends that refusing to play along was directly correlated to adverse actions by Spivey, Landry and Wells Fargo, which provided motive by Spivey and Landry to terminate Hartzman, as a termination as opposed to a claw back may have positively affected their compensation.
Posted by g at 12:54 PM