"The economic situation is deteriorating for the average American, the mood of the country is darkening, and the world is awash in debt and turmoil.

Every country is attempting to print their way to renewed prosperity.

No one wins a race to the bottom.

The oligarchs have chosen a path of currency debasement, propping up insolvent banks, propaganda and impoverishing the masses as their preferred course.

...Their lies and deception have held sway, but they have only delayed the final collapse of a boom brought about by credit expansion. They will not reverse course and believe their intellectual superiority will allow them to retain their control after the collapse.”
.
.
"An initial spark will trigger a chain reaction of unyielding responses and further emergencies. The core elements of these scenarios (debt, civic decay, global disorder) will matter more than the details, which the catalyst will juxtapose and connect in some unknowable way...

At home and abroad, these events will reflect the tearing of the civic fabric at points of extreme vulnerability – problem areas where America will have neglected, denied, or delayed needed action.”
.
.
"Facts don’t matter in world of QE for the psychopathic titans of Wall Street and misery for the indebted peasants of Main Street. The government data drones, Ivy League educated Wall Street economists, and the obedient corporate media propaganda apparatus declare that GDP has grown by 2% over the last four quarters and we are not in a recession. If you believe their bogus inflation calculation then just ignore the collapsing retail sales, stagnant real wages, and rising gap between the uber-rich and the rest of us."
.
.
"Corporate profits have leveled off at record highs as mark to fantasy accounting fraud, condoned and encouraged by the Federal Reserve, along with loan loss reserve depletion and $5 billion of risk free profits from parking deposits at the Fed..." 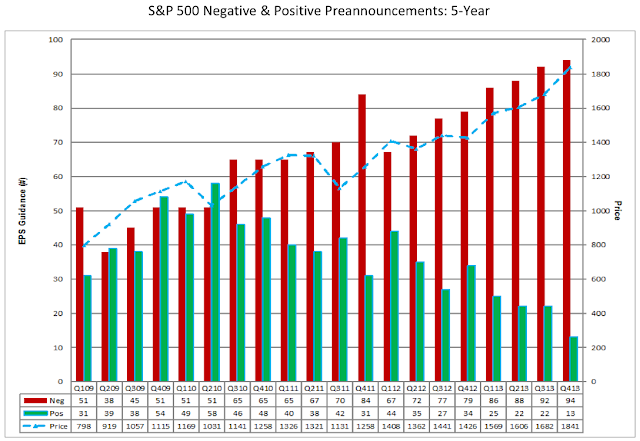 "Bernanke’s QEternity, Wall Street’s high frequency trading supercomputers, record levels of margin debt, a dash of delusion, and a helping of clueless dupes have taken the stock market to another bubble high."
.
.
"The problem with bubbles is that they force one to decide whether to look like an idiot before the peak, or an idiot after the peak. There’s no calling the top, and most of the signals that have been most historically useful for that purpose have been blazing red since late-2011."
.
.
"Japan is still a bug in search of a windshield. With a debt to GDP ratio of 230%, a population dying off, energy dependence escalating, trade surplus decreasing, an already failed Prime Minister vowing to increase inflation, and rising tensions with China, Japan is a primary candidate to be the first domino to fall in the game of debt chicken."
.
.
"The EU has temporarily delayed the endgame for their failed experiment. Economic conditions in Greece, Spain and Italy worsen by the day with unemployment reaching dangerous revolutionary levels. Pretending countries will pay each other with newly created debt will not solve a debt crisis. They don’t have a liquidity problem. They have a solvency problem. The only people who have been saved by the actions taken so far are bankers and politicians."
.
.
"The little people are bearing the burden of the Obamacare insurance premium increases. The number of employed Americans has increased by 1 million in the last year... The anger among the former middle class is simmering below the surface, as Bernanke’s policies further impoverish the multitudes... Holder and the U.S. government remain fully captured by Wall Street. The states have proven to be toothless in their efforts to enforce the law against Wall Street. The continuing revelations of Wall Street fraud and billions in fines paid by JP Morgan and the other Too Big To Trust banks have been glossed over by the captured mainstream media. As long as EBT cards, Visas and Mastercards continue to function, there will be no outrage from the techno-narcissistic, debt addicted, math challenged, wilfully ignorant masses."
.
.
"While most people get lost in the minutia of day to day existence and supposed Ivy League thought leaders are consumed with their own reputations and wealth, apparent stability will morph into terrifying volatility in an instant. The normalcy bias being practiced by an entire country will be shattered in a reality storm of consequences."


If a nation prints more money,
like cutting a 16 inch pizza into 12 slices instead of 8,
is each slice worth less?

This has been held as self-evident truth in modern monetary policy.


What if the pizza shrinks while the number of slices rise?

But this will quickly become antisocial as the entire west goes through a structural change in demographics caused by babyboomer retirement. BoJ seems to have realized this early and well; they have managed their social transition with remarkably success, despite much sneering from western economists (I argued here  that the Japanese lost decades is in fact a great achievement that US will only wish to match in 10 years).


If Bernard Madoff
distributed money received from new investors to older investors
until there wasn’t enough money to continue,
does Social Security operate under the same structure
with mandatory participation?

ECB seems to have realized this judging from their proclaimed resolve for austerity as opposed to unlimited simulus.


Create a higher likelihood of a better present
by securing need and achieving want,
in the shortest time with the least risk, for as long as possible,
by thinking of what and when relative to what was,
and what may happen after what could happen next.

The big question is: when will Fed and US government realize this?


Our Social Security system
is the very definition of a Ponzi, or pyramid scheme.

The reason for this fundamental shift is simple: soon-to-be retirees need to save but inflationary policy sacrifices savers for the sake of stimulating economic growth.


What does a 70 year old on a fixed income do,
when faced with a 0.05% return, intead of a 4% return,
and what happens after most of the old folks
switch to higher yielding, higher risk investments?

In normal demographics..., most people get to participate in the growing economy by staying employed or employing; even though everybody's savings get eroded by moderate inflation, there's a good chance that most will be more than compensated by increasing earnings. Retirees are net payers for inflation because they can't replenish with inceasing earnings, as is always the case...


Should costs exceed incoming revenues sooner,
if millions of Boomers involuntarily retire
and apply for early Social Security benefits during an economic decline,
as average income falls and debt and medical costs to income ratios spike?

Starting from right now, however, as babyboomers go into retirement or start deligently (perhaps belatedly) saving for retirement, inflationary policy will cause much more pain than ever seen before.


Are Baby Boomers going to get more or less than they think,
if the supply of what they want to sell exceeds demand
as they exchange assets for needed goods and services
in the same era?

Even under "moderate inflation" scenario, it's still a significant erosion of buying power and living standard over 10, 20, 30 years...


If workers earn, pay taxes, spend, save and invest,
while retirees divest, downsize, budget
and draw income and healthcare benefits,
what’s going to happen when more retirees want
what fewer workers may not be able to deliver?

...Japanese style stagnation is the best possible outcome during this transition...


Should interest rates and financial markets rise or fall,
if the rest of the world becomes less able or willing
to finance American lifestyles?

Do we cope with it or fight a losing battle in which everyone loses?"


If you found the present negatively affecting the future,
should you try to fix it?
Posted by g at 9:50 AM