"Our consumer society is dying – asphyxiated by debt – shorter of breath and one day closer to death."

Every person who had a job over this time frame should have accumulated a decent level of retirement savings.

That is why the chart below is so shocking. 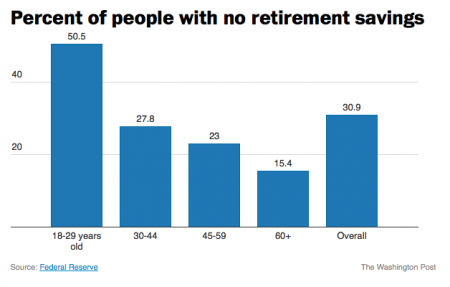 ...over 50% of 18 to 29 year olds have no retirement savings. With the terrible job market, declining real wages, massive levels of student loan debt, two stock market crashes in the space of eight years, and 4% annual returns since 2000, young people today have neither the means nor trust in the system to save for retirement.

Their elders had no such excuse.

Just a minimal amount per paycheck saved over the last 30 years would have compounded to well over $100,000, even at modest salary levels. It is disgraceful that 25 million people over the age of 45 have saved nothing for their retirement. Far more disgraceful is the median household retirement balance of $3,000 for all working age households. There are 122 million households in this country and 61 million of them have $3,000 or less in retirement savings. 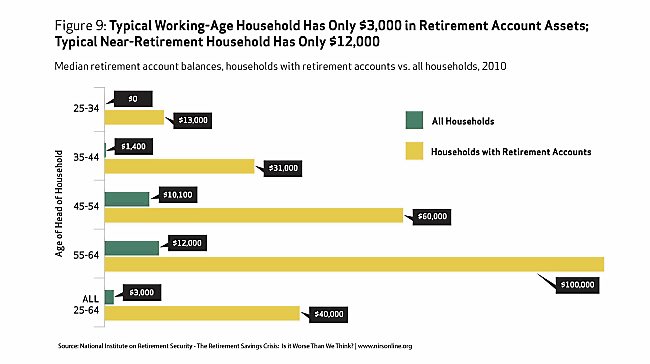 ...The concept of delayed gratification is unknown to the millions of nearly broke Boomers and Xers, shuffling towards an old age of poverty, misery and regret.

The question is how did it happen.

...Individuals in every generation have bucked the trend, lived within their means, saved for the future, and accumulated significant nest eggs for their retirement. But the aggregate numbers don’t lie.

The majority of those over the age of 45 have squandered their chance at a relatively comfortable retirement.

...The generations of live for today... bought those 4,500 sq foot McMansions with negative amortization 0% down mortgages. They had to keep up with the Jones-es by putting in granite counter-tops, stainless steel appliances, home theaters, Olympic sized swimming pools, and enormous decks. They have HDTVs in every room in their house and must have every premium cable channel, along with the NFL package. They upgrade their phones every time Apple rolls out a new and improved version. They pay landscapers to manicure their properties. They lease new BMWs every three years. They have taken exotic vacations on an annual basis. They haven’t packed a lunch for themselves since they were 16 years old. Eating out for lunch and dinner has been a staple of their existence for decades. That morning Starbucks coffee is a given. A new wardrobe of name brand stylish clothes for every season is a requirement because your neighbors and co-workers are constantly judging you.

...The "have it now" generations got it then and have virtually nothing now because they acquired all of these things with debt.

Real cumulative household income is up 10% since 1980.

We’ve had decades of faux prosperity aided and abetted by Wall Street shysters, corrupt politicians, mega-corporation mass merchandisers, and Madison Avenue maggots trained in the methods of Edward Bernays to convince willfully ignorant consumers to consume. And consume we did.

Saving, not so much.

..Saving money requires only one thing – spending less than you make.

Most Boomers and Xers chose to spend more than they made and financed the difference. When the average credit card balance is five times greater than the median retirement account balance, you’ve got a problem. The facts about our consumer empire of debt are unequivocal as can be seen in these statistics:

...The Wall Street/Federal Reserve scheme to boost home prices and repair their insolvent balance sheets has successfully kept young people from ever being able to afford a home. So you have young people unable to save, invest or spend. You have middle aged and older Americans with little or no savings, mountains of debt, low paying service jobs, and an inability to spend. The only people left with resources are the .1% who have captured the system, peddle the debt, and reap the rewards of consumption versus saving. They may be able to engineer a stock market rally to further enrich themselves, but they can not propel the real economy of 318 million people.

...The Federal government has already made $200 trillion of entitlement promises it can’t keep.

State governments have made tens of trillions in pension promises they can’t keep.

They can’t tax young people who don’t have jobs. Older generations who think the government is going to rescue them from their foolish shortsighted choices are badly mistaken. Their benefits are likely to be reduced because the unsustainable will not be sustained.


So you run and you run to catch up with the sun but it’s sinking
Racing around to come up behind you again.

The sun is the same in a relative way but you’re older,
Shorter of breath and one day closer to death.

Every year is getting shorter; never seem to find the time.

The time is gone, the song is over,

Thought I’d something more to say.