"As required by the Dodd-Frank Act ...the Federal Reserve disclosed detailed information about (i) entities that received loans or other financial assistance under a Section 13(3) credit facility between December 1, 2007, and July 21, 2010; ...or borrowed through the Term Auction Facility (TAF) during that time frame.

...The specific terms of any repayment expected, including the repayment time period, interest charges, collateral and other material terms...

Unencumbered Collateral represents assets free and clear of any encumbrances such as creditor claims or liens, which in this case, showed that Wachovia had an unreported Federal Reserve credit line worth tens of billions during the financial crisis very few knew of, which included Robert Steel.

On July 9, 2008, Robert Steel became president and CEO of Wachovia after working for Goldman Sachs from 1976 to 2004 and the US Treasury under former Goldman Sachs CEO Henry Paulson from October 10, 2006 until July 9, 2008. During his tenure at the U.S. Treasury, he revived the President's Working Group, the core group to respond to the global economic crisis of 2008.

The Working Group consists of:

After Perrella Weinberg announced Steel's new CEO post, Richard Craver of the Winston-Salem Journal wrote "Steel received some criticism during Wachovia’s downfall for playing up its health, including spending $16.1 million to buy 1 million shares of stock shortly after he took over as chief executive. ...At the same time, unknown to the public, Wachovia was borrowing heavily from the Federal Reserve."

Steel bought Wachovia’s stock while in possession of material, nonpublic insider information and violated Sarbanes-Oxley, while not informing financial advisers acting as fiduciaries for accounts governed by the Investment Advisors Act of 1940 under his supervision.

Bloomberg detailed Federal Reserve provided transactions on August 22, 2011, including undisclosed loans to Wachovia and Wells Fargo amongst others.


The Sarbanes-Oxley Act of 2002, which I have taught in ethics courses for CPAs and others for 10 years, requires financial statements fairly present, in all material respects, a company’s financial condition. Financial information in press releases or other public disclosures must not “contain an untrue statement” or omit a statement of  material fact necessary to make statements not misleading.

In an interview with CNBC's Jim Cramer On Monday, September 15, 2008, Steel said "I think it's really about...transparency. People have to understand the assets and really be able to say, this is what I own... Complete disclosure. ...we can work through this with transparency, liquidity and capital. ...Our strategy was to give you all the data so you could make your own model. We tell you what we're doing... ...we're raising capital ourselves by basically shrinking the balance sheet, cutting the dividend, cutting expenses. We can create more capital ourselves that way... for now, we feel like we can work through this..." After Jim Cramer asked "Should there be any sort of quick regulatory relief from the SEC that would make life easier to be able to make your bank much stronger?", Mr. Steel responded "I don't think it's about my bank."

After not reporting TAF loans, Wachovia's CEO wrote "I, Robert K. Steel, certify that: I have reviewed this Quarterly Report on Form 10-Q for the quarter ended September 30, 2008 of Wachovia Corporation; Based on my knowledge, this report does not contain any untrue statement of a material fact or omit to state a material fact necessary to make the statements made, in light of the circumstances under which such statements were made, not misleading with respect to the period covered by this report...

Mr. Steel was at least aware of Wachovia’s Federal Reserve loans since July, 2012, if not the undisclosed loans to multiples of other financial institutions. 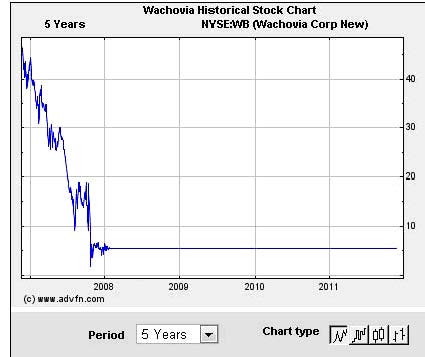 On June 22, 2010, Robert Steel was appointed Deputy Mayor for Economic Development by New York City Mayor Michael Bloomberg, after which, Steel resigned his seat on the Wells Fargo board. According to Morningstar data, Mr. Steel owned 601,903 shares of Wells Fargo in 2010, which would have been worth about $30,564,634 as of May 30, 2014.

If Wachovia's shareholders knew how much liquidity was available from the Federal Reserve, Wachovia's stock price wouldn't have fallen to the degree it did, and would have most likely survived without being acquired.

That the merger between Wachovia and Wells Fargo was completed without either company disclosing the secret TAF loans indicates the US regulatory system has been compromised.
.
.
On December 21, 2011, Stephanie L. Hunsaker, Senior Assistant Chief Accountant Division of Corporation Finance at the Securities and Exchange Commission asked Wells Fargo & Company; "We have become aware through various news reports that you may have accessed various Federal Reserve ...sponsored funding programs during 2008 and 2009, including the Term Auction Facility (TAF)... We note from your disclosures during these periods that ...you do not appear to have provided any discussion about certain other programs that were in existence at this time, such as the TAF...

Wells Fargo responded by stating "We did participate in the Term Auction Facility (TAF) during 2008 through August 2009. TAF was established by the Federal Reserve in December 2007, and represented one of several sources of competitive, low-cost short term funding available to us. ...At December 31, 2008, our short-term borrowings under TAF totaled $72.5 billion, which included $40 billion of TAF borrowings by Wachovia Corporation at the time of acquisition [approved by the Federal Reserve Board which issued the loans].

However, the TAF borrowings were classified differently in the legacy Wells Fargo and Wachovia accounting systems (which had not been integrated as of the time the 2008 Form 10-K was prepared), which resulted in our reporting of $32.5 billion of the TAF borrowings in the “Commercial paper and other short-term borrowings” line item, and the $40 billion of Wachovia TAF borrowings reported in the “Federal funds purchased and securities sold under agreements to repurchase” line item...

...our management did not distinguish TAF from other sources of short-term borrowings, such as federal funds purchased, commercial paper or securities sold under repurchase agreements...

...We were a viable entity regardless of whether we participated in the programs. Further, our participation in the programs did not ...provide ...arrangements designed to insulate us from the economic effects of problem assets. ...our participation in the referenced programs did not materially affect, and was not reasonably likely to have a material future effect upon our financial condition or results of operations...

I believe Mr. Steel is guilty of insider trading and securities fraud.

The Federal Reserve Board led by Ben Bernanke, approved the merger without disclosing the loans to the public.

Wachovia's shareholders were defrauded by Wachovia's Robert Steel and Wells Fargo's John Stumpf, and no one at the federal level did anything about it, including US Attorney General Eric Holder.